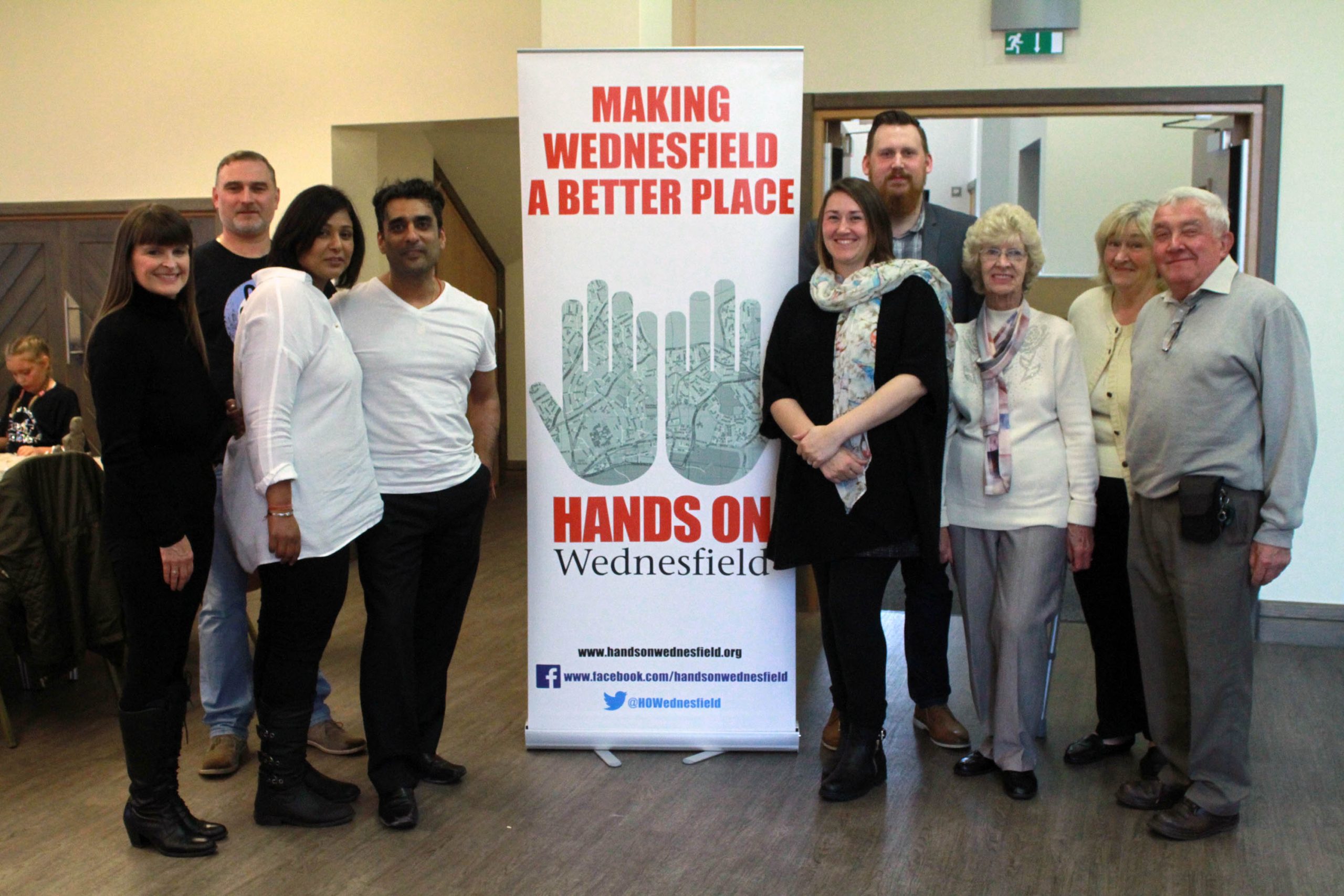 Local community group Hands on Wednesfield (formerly Wednesfield & Fallings Park Local Neighbourhood Partnership) were approached by Wolverhampton City Council in 2012 to oversee the spend of £35K of section 106 public realm money that had been earmarked for public art near Bentley Bridge Retail Park.

After appointing project manager Sophie Heath from Bilston Craft Gallery, Hands On Wednesfield worked to commission artists Planet Art, helped with consultation and decision making and saw the project through to it’s completion – over a period of 3 years. 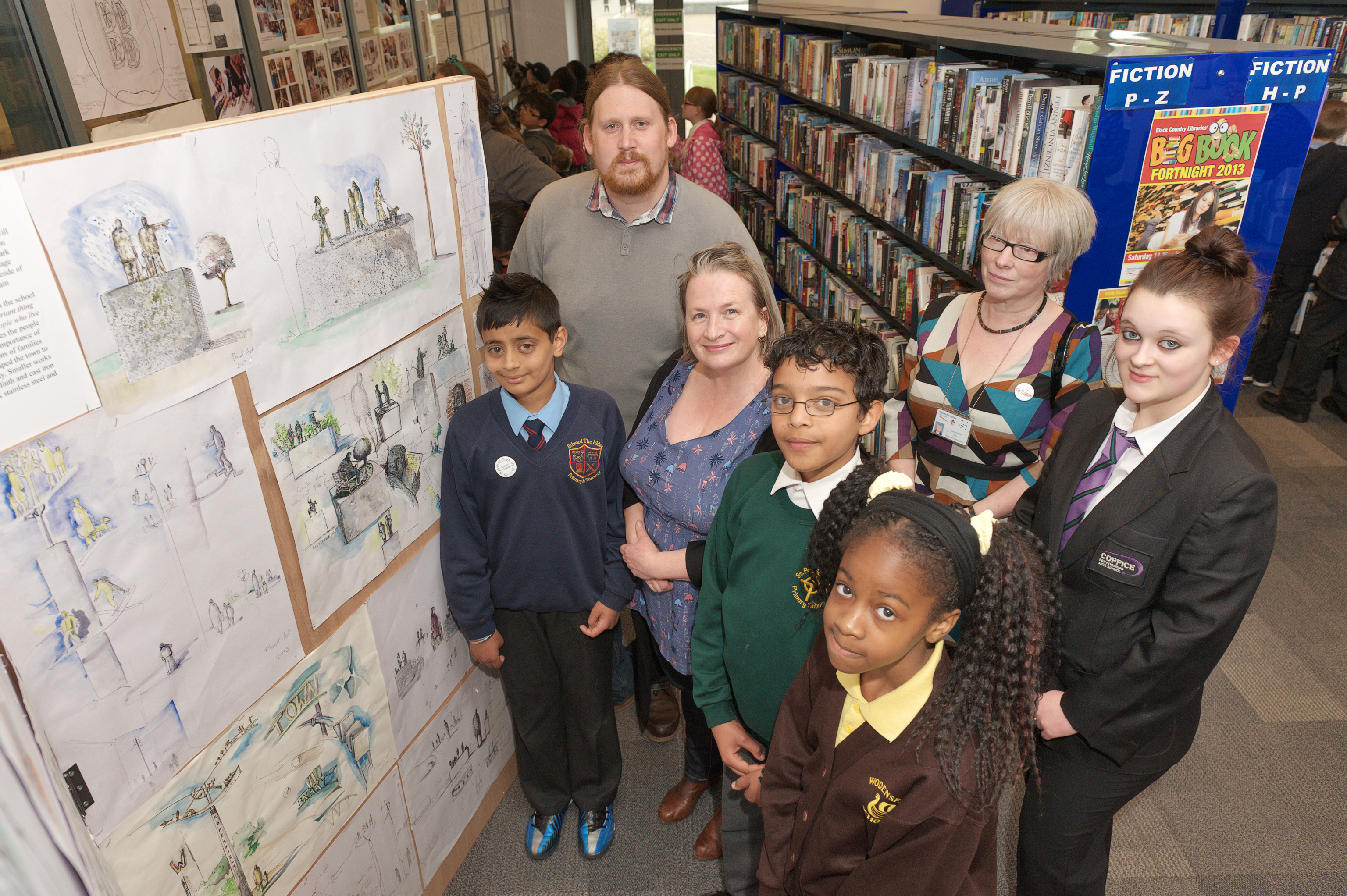 Over 1,000 people from Wednesfield were involved in the consultation between December 2012 and Summer 2013.

Following a consultation event which took place on a market stall at the 2012 Wednesfield Christmas lights event, Planet Art went on to deliver a number of workshops with local schools, as well as community & faith groups, including the Scouts.

An exhibition of drawings was held at Wednesfield Library to encourage further public feedback on the plans for the artwork. 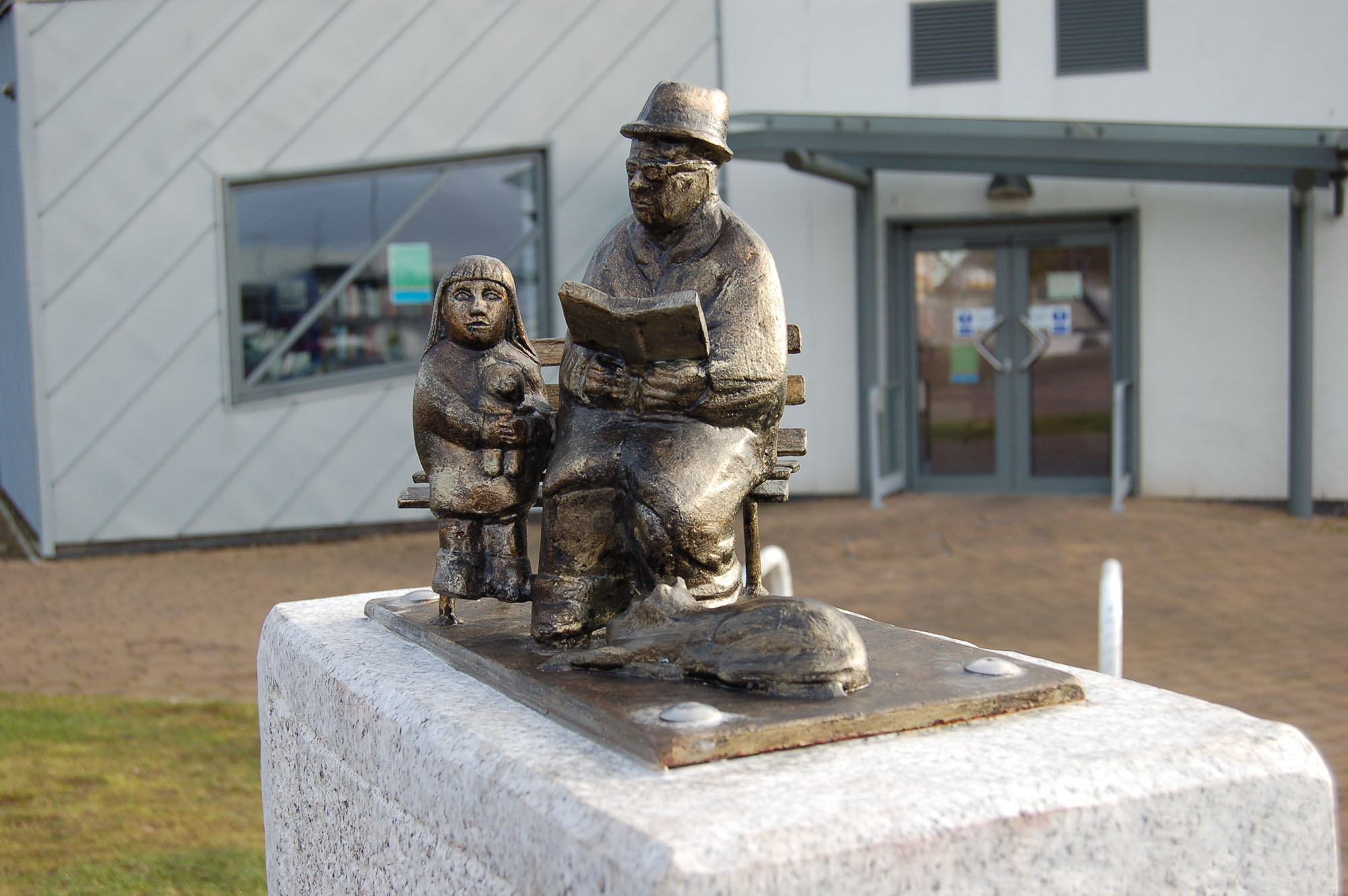 The pieces were created by artists Ron Thompson & Julie Ward aka Planet Art, who are based in nearby Walsall Wood.

The overarching theme from all of the consultation, when people were asked what they associated with Wednesfield and what the sculptures should represent wasn’t the heritage (the Battle of Wodensfield) or the area’s industrial past (trap making and heavy industry), but the people.

The majority of those consulted associated the people in their lives as being the thing that reminded them of Wednesfield, so the artists responded to this by creating sculptures featuring people in typical local scenes.

Five pieces of stunning art, made from Cast Iron, Steel and Granite.

The 4 pieces featuring everyday scenes in Wednesfield are made from Cast Iron and secured to granite plinths – these were cast at a small family-run foundry in Willenhall.

The 5th piece – the wayfinder is made from marine-grade steel and features hand-made signs pointing to local landmarks. 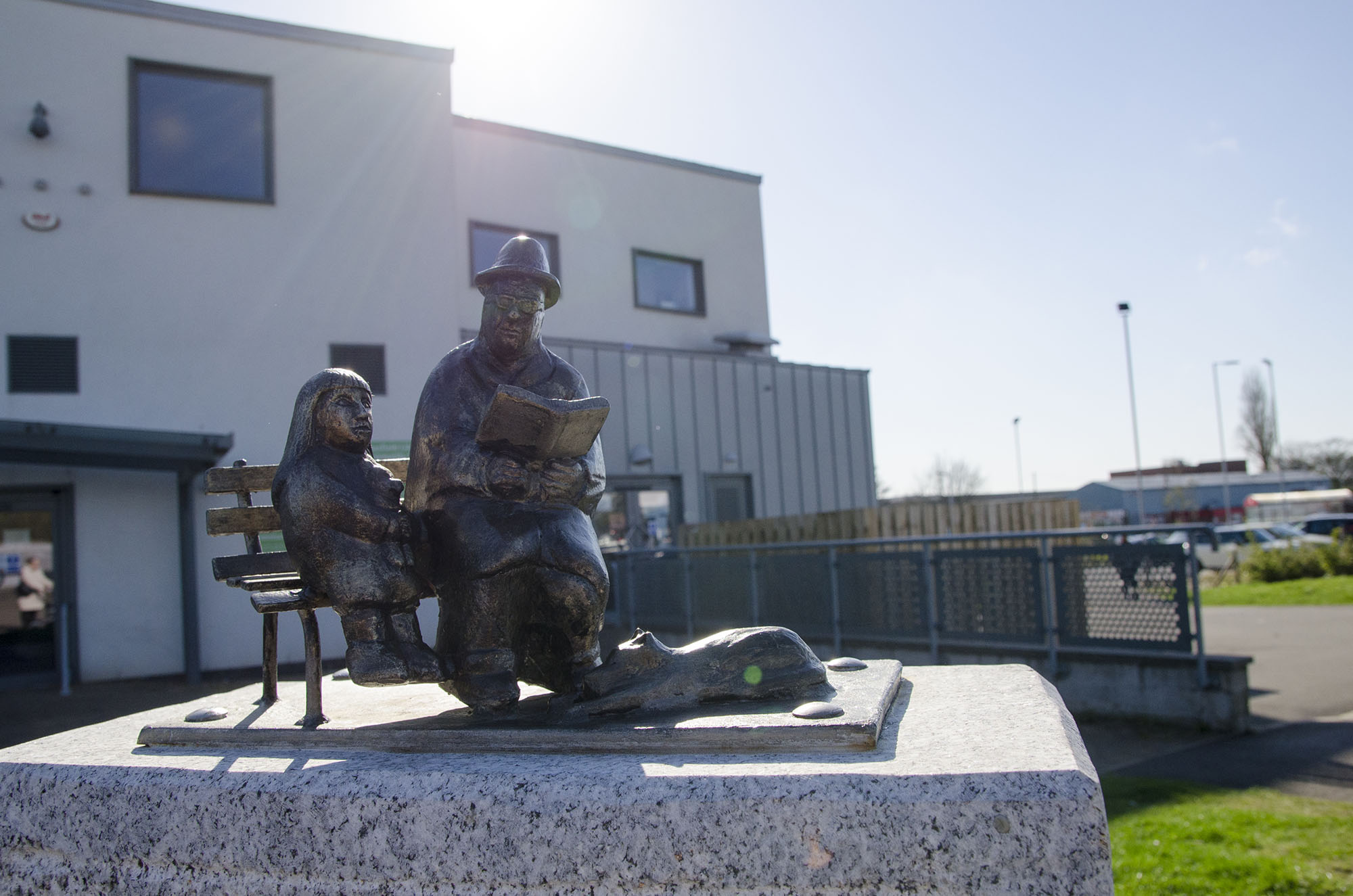 An elderly man reading to a young child outside the Library.

This man in this piece is based on working group member Roy Campbell. 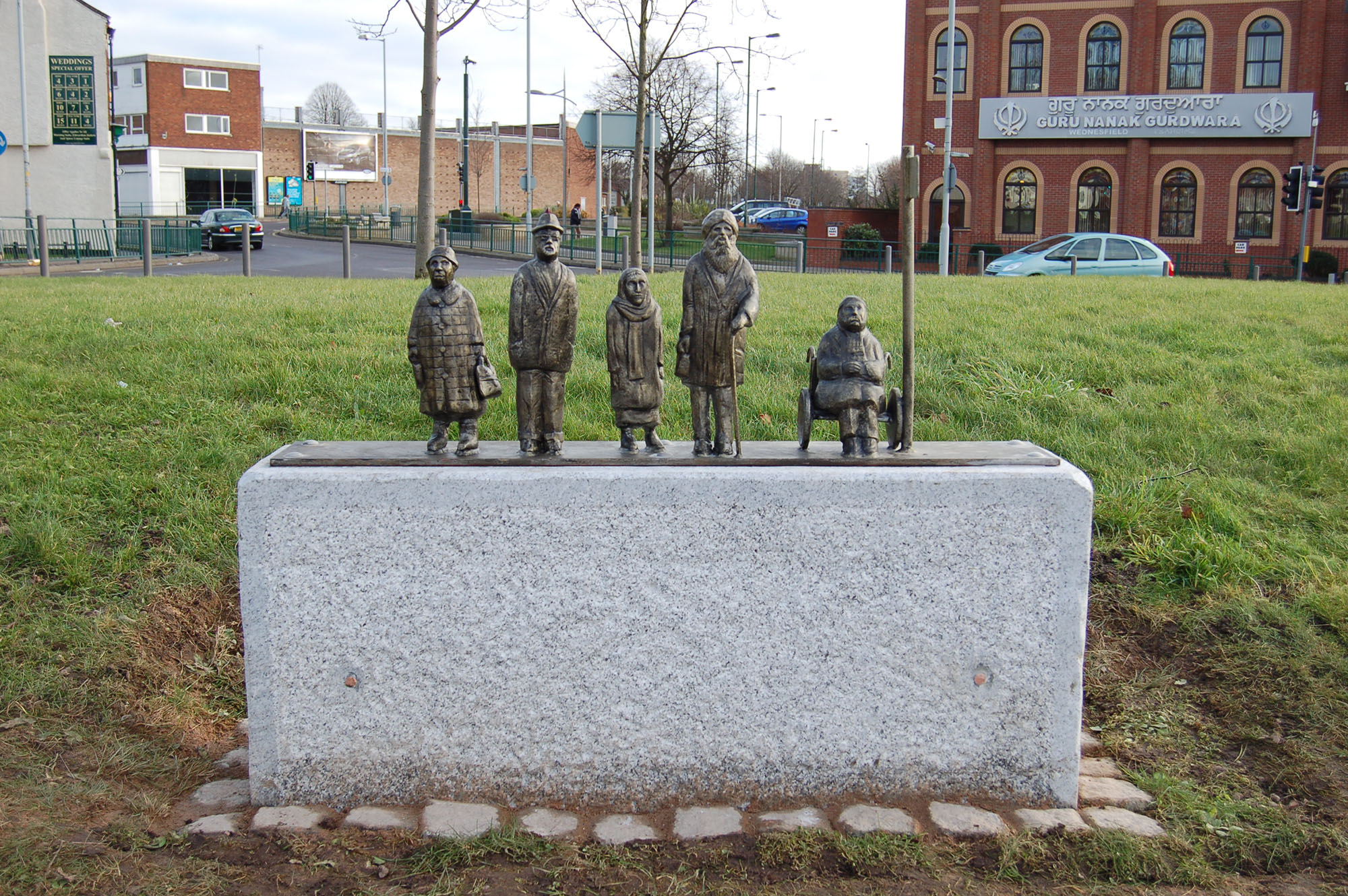 A typically diverse group of people waiting for the bus.

Located on the path between Wednesfield Library & the Pyle Cock / Rookery St. 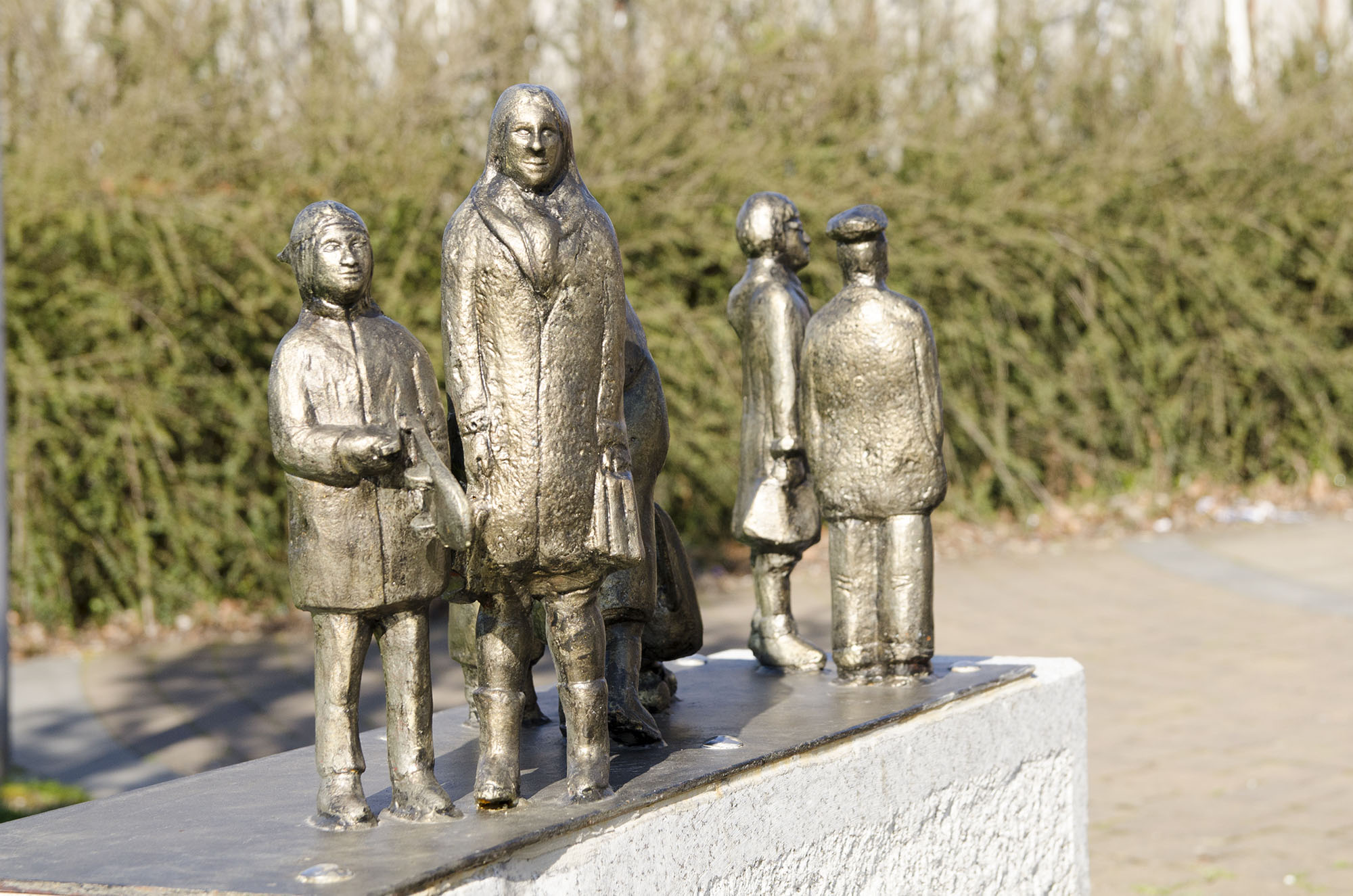 Located on the path between the Rookery St bus stop & the path to Sainsburys. 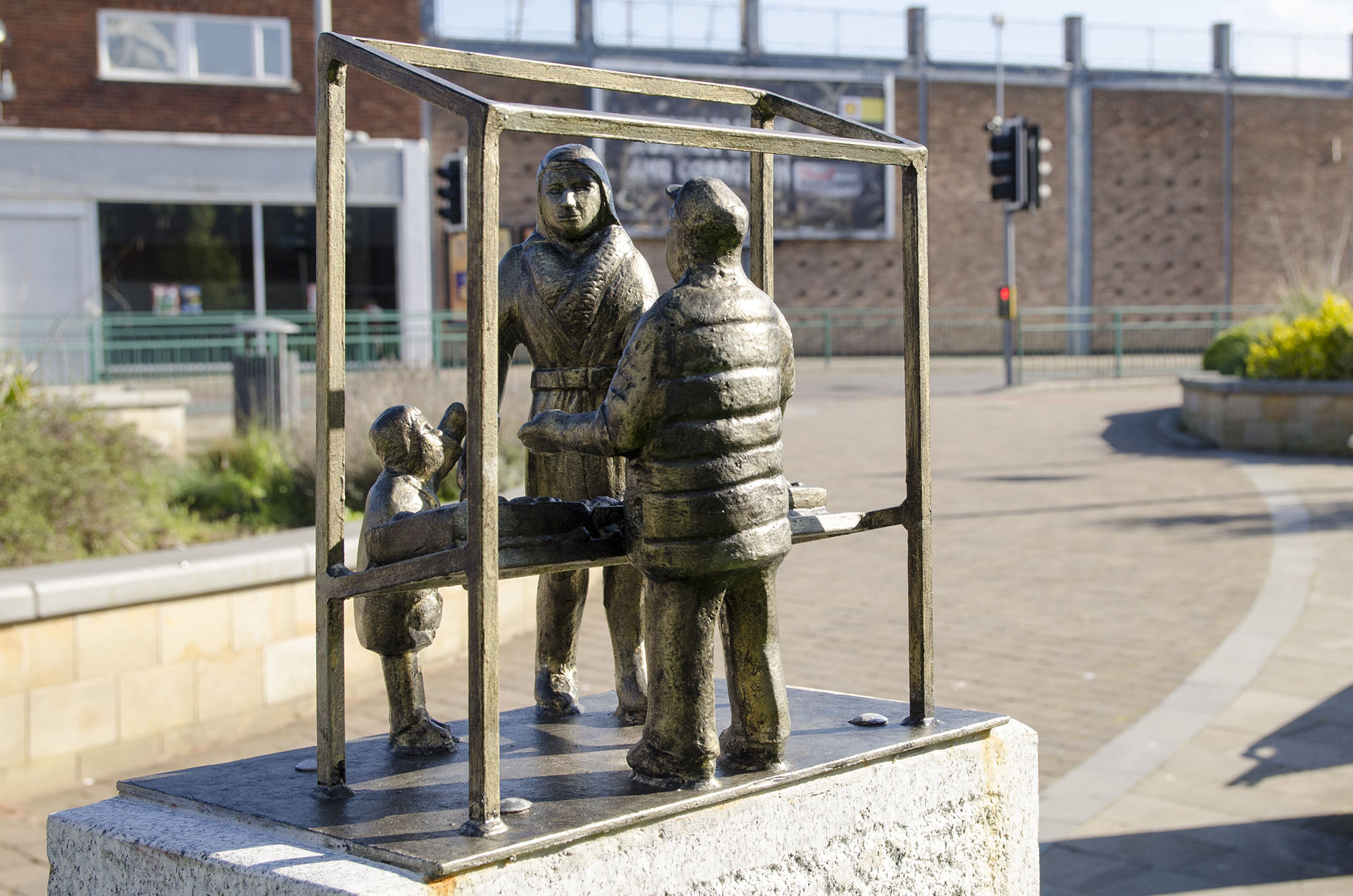 Wednesfield tradition – a mother and her child visit a market stall.

Located on the grass verge outside the Gurdwara, on the corner of Well Lane & Alfred Squire Rd, near to where Wednesfield Market once stood. 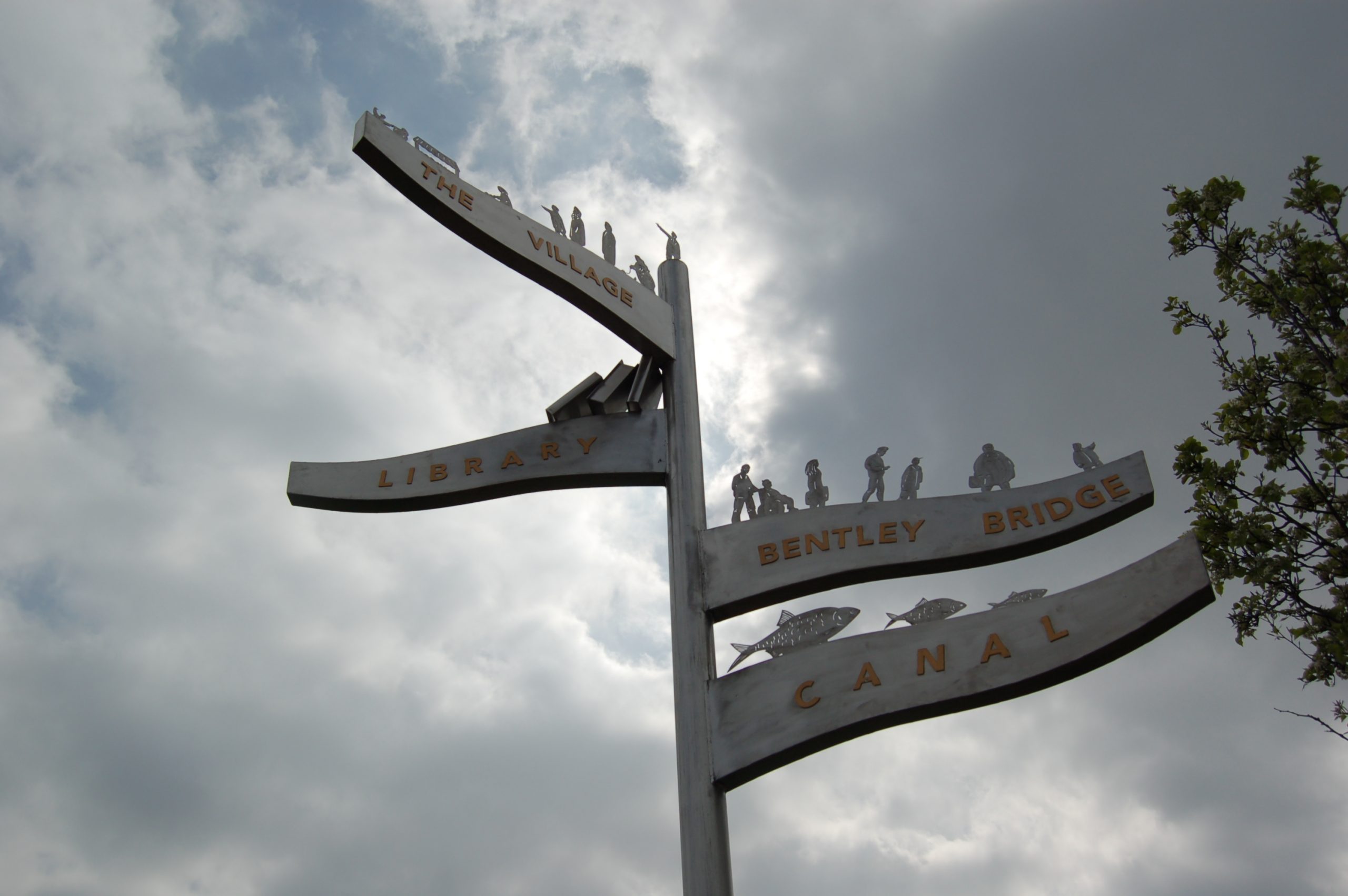 A steel lamp post-style piece, it’s ornate arms decorated with characters point to local landmarks such as the Village and the nearby canal.

Located near to The Reader.

Photos of the artwork and the project

Over 1,000 people were involved during the project which was managed by a small number of volunteers…

The following organisations were involved in the project:

The story of the Wednesfield Art Project

Throughout the project, we kept a diary of progress on local website WV11.co.uk. There were many up and downs and no one expected it to take over 3 years from beginning to end, but everyone involved agrees – it was worth the wait!

Planet Art is an arts partnership based in the Midlands.

Julie Edwards & Ron Thompson have been working together for the past 20 years. They specialise in the consultation, design/making, installation of public art works for a variety of clients.

All the Public Art pieces involve community engagement, research, design workshops and consultation. Many of the projects form part of a larger re-generation master plan.

Consideration for surrounding Architecture, landscape is always paramount. Working with the community from the outset, forms an important link, which enables the Art to be understood, respected and relevant. It restores a sense of pride and place.

Find out more at planetartsculpture.co.uk